We derive and test a generalization of Steady-State Ab Initio Laser Theory (SALT) to treat complex gain media. The generalized theory (C-SALT) is able to treat atomic and molecular gain media with diffusion and multiple lasing transitions, and semiconductor gain media in the free carrier approximation including fully the effect of Pauli blocking. The key assumption of the theory is stationarity of the level populations, which leads to coupled self-consistent equations for the populations and the lasing modes that fully include the effects of openness and non-linear spatial hole-burning. These equations can be solved efficiently for the steady-state lasing properties by a similar iteration procedure as in SALT, where a static gain medium with a single transition is assumed. The theory is tested by comparison to much less efficient Finite Difference Time Domain (FDTD) methods and excellent agreement is found. Using C-SALT to analyze the effects of varying gain diffusion constant we demonstrate a cross-over between the regime of strong spatial hole burning with multimode lasing to a regime of negligible spatial hole burning, leading to gain-clamping, and single mode lasing. The effect of spatially inhomogeneous pumping combined with diffusion is also studied and a relevant length scale for spatial inhomogeneity to persist under these conditions is determined. For the semiconductor gain model, we demonstrate the frequency shift due to Pauli blocking as the pumping strength changes.

Modern micro and nanofabrication techniques have allowed for the miniaturization of optical cavities and lasers to the micron scale. Interesting new lasers patterned on this scale include photonic crystal, disk and chaotic (stadium) shaped resonators, as well as random lasers. The complex geometry of these cavities demands a full treatment of the spatial variation of the lasing fields to understand their behavior, but until recently most laser theories were unable to include this spatial degree of freedom. The steady-state ab initio laser theory (SALT) has been developed over the past decade as a method of modeling the semiclassical characteristics of lasers with an arbitrary geometry, predicting the modal thresholds, frequencies, and emitted power, while giving a nearly exact treatment of the spatial saturation of the gain medium. It has proven to be extremely useful in understanding experimental results for random lasers and “chaotic” D-shaped cavities (chaos here refers to the pseudo-random fluctuations in the steady-state lasing fields, and not to chaotic temporal behavior).

In this paper, we derive the most general form of the SALT equations, a form that is necessary to study realistic atomic gain media, which often have many atomic levels, multiple lasing transitions, or carrier diffusion, while still retaining all of the benefits of treating the spatially-dependent problem fully and accurately. By retaining the full spatial degrees of freedom, we are able to study carrier diffusion across many different length-scales within the system, simultaneously treating the smoothing out of spatial hole-burning of the inversion due to the active lasing modes as well as any effects of applying a non-uniform pump to the gain medium. This also allows for the study of carrier diffusion in multiple dimensions, as shown in the figure below. Here, the quadrupole cavity (whose boundary is indicated by the white border) is only pumped in the center, and we plot the inversion profile (top row) and threshold lasing mode profile (bottom row) as carrier diffusion is increased in the system. As the diffusion coefficient is increased, more gain is available towards the edge of the cavity, which yields qualitative shifts in the profile of the threshold lasing mode, changing from a bow-tie mode with large overlap in the middle of the cavity, to a high-Q whispering gallery mode that only exists at the edge of the cavity. Such calculations are computationally unfeasible using more standard approaches to solving the laser equations for such systems. 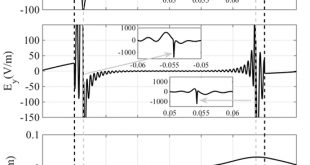 Method to penetrate through the overdense plasma sheath